Kashmir Live Updates: Amit Shah moves J&K Reorganisation Bill in Lok Sabhar: On Friday, Panic gripped the Kashmir Valley for tourists and pilgrims of Amarnath Yatra after the Jammu and Kashmir (J&K) government’s security advisory said to limit their pilgrimage about some possible major decisions regarding the state’s special status. What is Article 370 and 35A?

The tourists, as well as the Amarnath Yatra pilgrims, started leaving the Kashmir Valley on Saturday, and the J&K Governor Satya Pal Malik said that there was no need to panic. He also requested political leaders to ask their supporters to keep their calm and do not believe in “exaggerated rumours”. Malik had also said that there were no plans to retract Article 35A.

10:30 AM
Jammu & Kashmir: Section 144 is imposed in #Srinagar, people move about for essential work; #Article370 was abrogated and Jammu & Kashmir was made a Union Territory (UT) with legislature, yesterday. 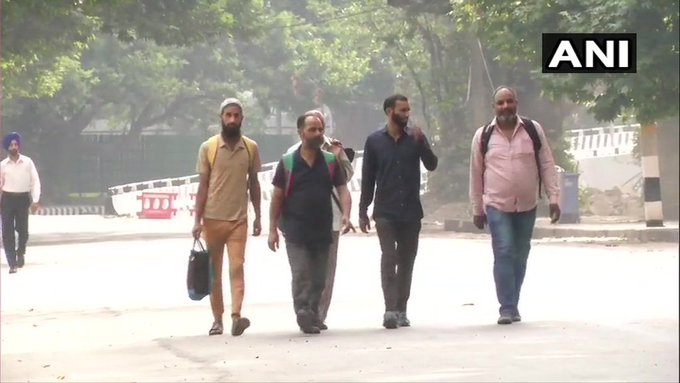 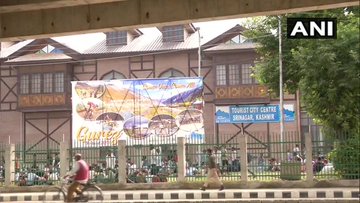 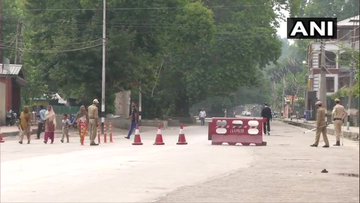 FM Nirmala Sitharaman: It is something the country has been waiting for the last 70 years. Even our manifesto mentioned the need to abrogate #Article370, so it is not something we brought out suddenly like a rabbit from a magic hat.

TK Rangarajan,CPI(M) in Rajya Sabha: It’s black day.Indian constitution has been raped by BJP govt. You didn’t consult people of J&K-Ladakh. You dissolved Assembly,you don’t want to hold any election. You’ve taken another 35000 Army people there. You’re creating another Palestine 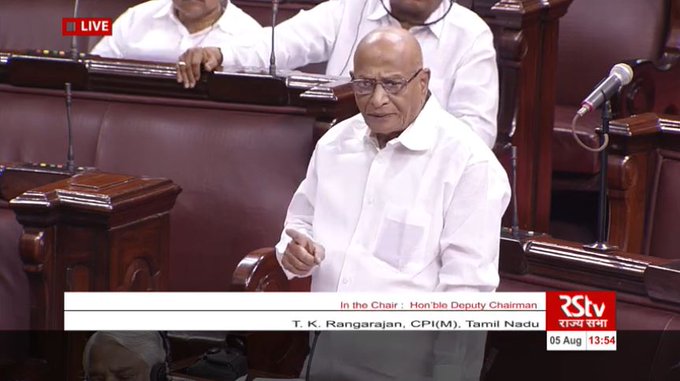 MK Stalin, DMK President: Without consulting people of Jammu and Kashmir, Article 370 has been taken away. Democracy has been murdered. AIADMK is also supporting the decision which is condemnable. 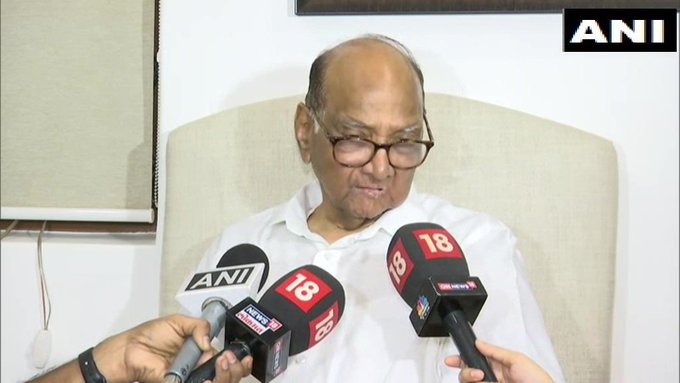 MDMK leader Vaiko in Rajya Sabha: You have played with the sentiments of people of Kashmir. When additional army personnel were deployed there, I was worried. Kashmir should not become Kosovo, East Timor and South Sudan.

BJD MP, Prasanna Acharya in Rajya Sabha: In real sense today, Jammu & Kashmir has become a part of India. My party supports this resolution. We are a regional party but for us nation is first. 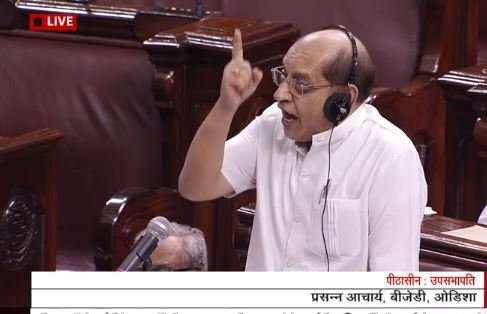 Close to 8,000 paramilitary troops airlifted and moved in from Uttar Pradesh, Odisha, Assam and other parts of the country to the Kashmir valley. Troops induction still going on.

HM Amit Shah: This is not the first time, Congress in 1952 and 1962 amended article 370 through similar process. So instead of protesting please let me speak and have a discussion, all your doubts and misunderstandings will be cleared, I am ready to answer all your questions. 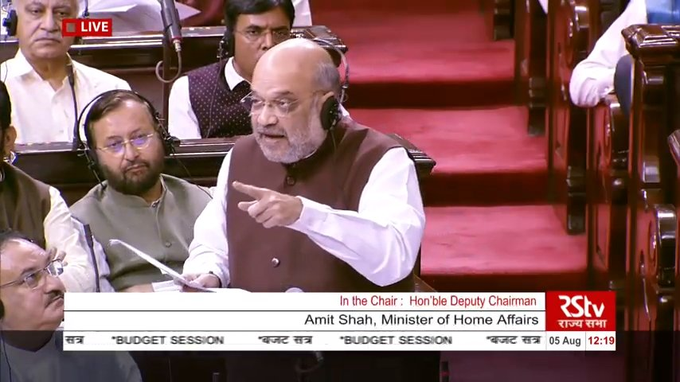 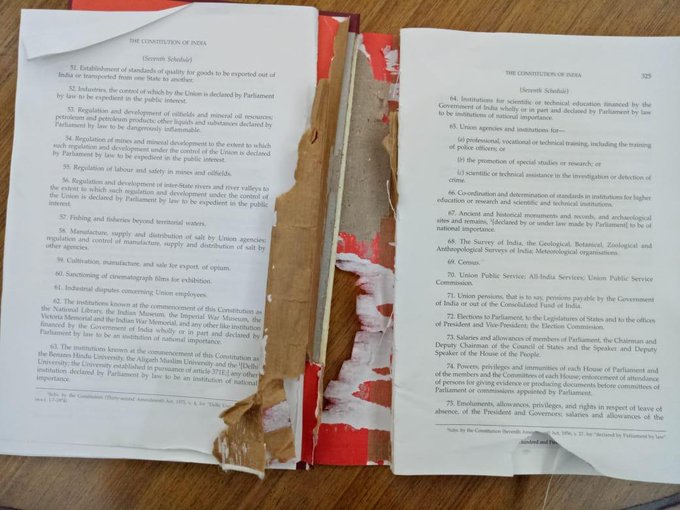 Satish Chandra Mishra, BSP MP, in Rajya Sabha: Our party gives complete support. We want that the Bill be passed. Our party is not expressing any opposition to Article 370 Bill & the other Bill. 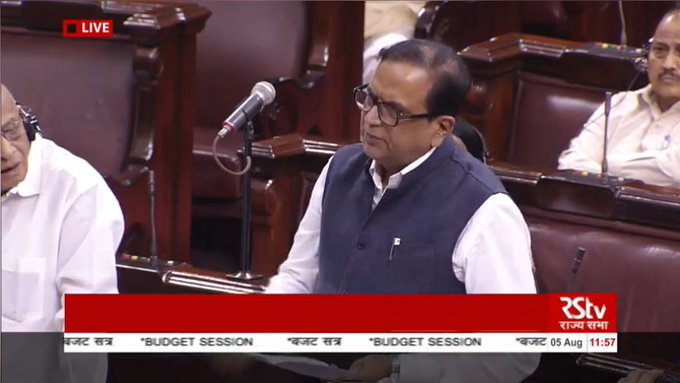 PDP’s RS MPs Nazir Ahmad Laway&MM Fayaz protest in Parliament premises after resolution revoking Article 370 from J&K moved by HM in Rajya Sabha; The 2 PDP MPs were asked to go out of the House after they attempted to tear the constitution. MM Fayaz also tore his kurta in protest 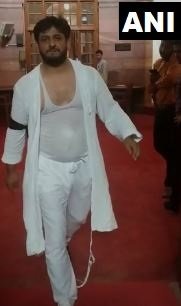 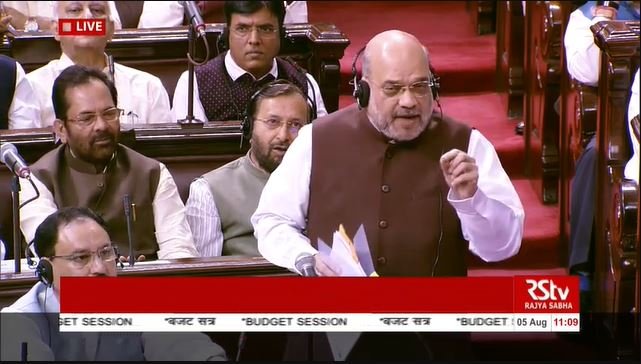 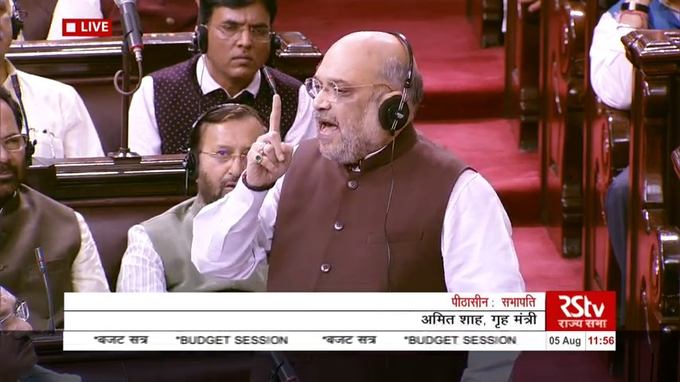 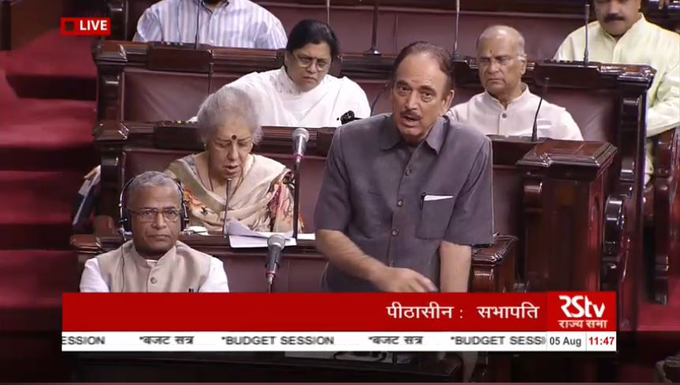 Article 370 grants special status to Jammu and Kashmir and limits Parliament’s power to make laws concerning the state. Article 35A empowers Jammu and Kashmir assembly to define ‘permanent residents’ for bestowing special rights and privileges on them. The government has proposed to remove all provisions Article 370.

Rajya Sabha has been adjourned as Amit Shah’s proposal triggered massive chaos in the House. Amit Shah has proposed to remove Article 370 that gives special status to Jammu and Kashmir.

Amit shah proposed that all regulation under Article 370 will not be applicable after Presidential nod.

Home Minister Amit Shah has moved a proposal to revoke the contentious Article 370 from Jammu and Kashmir, triggering a massive chaos in Rajya Sabha as opposition MPs shout slogans and start protesting.

11:15 AM IST
Posted by Sanchari Chatterjee
Amit Shah: 4 bills and issues need to be discussed before the Kashmir situation

Home Minister Amit Shah replies to Ghulam Nabi Azad, says, “I have brought 4 bills before the House that need to be discussed before the situation.”

Congress MP Ghulam Nabi Azad raises Kashmir issue in Rajya Sabha, says, “Entire Kashmir is under curfew. It’s a war like situation. Three CMs are under house arrest. That should be discussed first. Bill can be passed later.”

Home Minister Amit Shah has risen to speak on Kashmir as Congress MP Ghulam Nabi Azad demands answers on the ongoing crisis over the situation in Kashmir.

11:04 AM IST
Posted by Sanchari Chatterjee
PDP MPs tell Opposition: There is a situation of chaos in Kashmir

PDP MPs Nazir Ahmad Laway and Mir Mohammad Fayaz, in a letter written to opposition members, have said, “There is a situation of chaos and uncertainty all around. People do not know what is cooking between the top brasses of the present government vis-a-vis the Kashmir issue.”

“Over the past few days we have seen some of the most irresponsible speculation regarding Kashmir, be it revocation of Article 35A, Article 370 or trifurcation of the state. Yet the truthfulness of these statements cannot be ruled out owing to the criminal silence of the central government over the same. We would like to reinforce that the Kashmir issue is a political issue and needs to be addressed politically,”

At 8:00 am, the Governor Satya Pal Malik said that a pure security measure is being mixed up with some issues with which it has no link which is the source of the panic. He requested “not to mix up matters, to maintain calm and not believe exaggerated rumours being circulated all around”.

At 8:40 AM, encounter took place in Malmapanpora area of Sopore, where at 8:51 AM, one terrorist killed in encounter with security forces in Sopore.

District Magistrate Srinagar Shahid Choudhary, tweeted, “In Srinagar district we have sufficient stocks of all essentials including food, fuels and medicines. Roads are open, replenishment is routine. People are requested to avoid hoarding and panic shopping.”

On Saturday, Border Security Force said, “A Pakistani intruder has been apprehended by BSF near Ferozepur in Punjab. Concerned authorities are questioning him about his whereabouts and intentions. Nothing objectionable recovered from him.”

Former Jammu and Kashmir CM Omar Abdullah tweeted, “Will be taking a delegation of JKNC colleagues to meet Governor Malik at 12 noon today.”

Congress spokesperson Manish Tewari tweeted, “J&K facing Pakistan-sponsored militancy since October, 1947. Worst period – 1990 – when VP Singh PM supported by BJP and Communists. Neither in October-47 nor in 1990 did the Indian state surrender to Pakistan like today. Government should have provided security to pilgrims/tourists rather than asking them to cut and run.”

TRS working president KTR on Twitter said, “Been receiving some anxious messages from Telugu students of NIT, Srinagar as Government of India has asked for campus to be vacated and asked students to leave immediately. Be rest assured, Government of Telangana will assist you in safe return. Have alerted our officials to reach out and help.”

After an emergency meeting between BJP core members, state BJP chief Ravindra Raina  also said that Article 35A and 370 have all the time disrupted the concord among people of Jammu and Kashmir.

For this weekend, the Airfares for flights from Srinagar have shot up to abnormally high levels and for a one-way direct flight from Srinagar to Delhi, the charges are between Rs 10,000 to Rs 22,000, even of low-cost airlines like IndiGo, SpiceJet, GoAir and AirAsia according to travel portals. The normal rates usually hover around Rs 3,000.

Former J&K CM Omar Abdullah, in a press conference said that he met Governor Satya Pal Malik to get clarity on the condition. He said, “We’re not getting any answers. There is a lot of speculation on trifurcation as well”. He also said, “After yesterday’s order, the situation in valley is tense and people are hoarding outside petrol pumps and grocery stores. And in addition to that government’s order to ask tourists and Yatris to leave which has never happened before nor has any tourists been attacked.”

He added, “We asked Governor if it’s about Article 35A, Trifucation or 370, but he said that there is nothing like that. We want Centre to issue a statement on Monday during Parliament. We want to hear from Parliament so that people here get clarification.”

Peoples Conference chief Sajad Lone tweeted, “I believe there is dire need for the central government to clear what is happening out here. It is strange. We, the inhabitants of the land, don’t have the remotest idea of what is going to happen.”

The security forces have killed two of the Jaish-e-Mohammed (JeM) terrorists in Sopore, Jammu and Kashmir. Along with this, they have also recovered arms and ammunition.

Australia has also issued a travel advisory to its citizens by stating, “We advise against all travel here due to the very high risk. If you do travel, you should typically seek professional security advice. Be aware that regular travel insurance policies will be void and that the Australian Government is unlikely to be able to provide consular assistance,”