Pulwama attack live updates: Death toll mounts to 42; Cabinet Committee on Security to meet tomorrow: The worst terror attack in Kashmir on Thursday has left the nation in great shook. The attack on Central Reserve Police Force (CRPF) jawans in Pulwama district in Jammu and Kashmir leads more than 30 personnel killed as well as leaving more than 20 others injured in that blast. The blast was prompted by militants to aim two vehicles carrying the CRPF jawans.

Here is the big highlights and live updates of the attack on a CRPF convoy in Pulwama district:

In the whole area of South Kashmir the internet services have been suspended whereas the speed of internet slowed to 2G in Srinagar district.

As per the recent reports, there is going to be a Cabinet Committee on Security to meet at 9.15 am tomorrow, 15th February 2019.

The new teams such as NSG, NIA along with the forensic experts joined the investigation and have been sent to Srinagar in order to help Jammu and Kashmir Police in forensic evaluation of the crime scene.

As per the police reports, the exact number of casualties has not yet confirmed but till now death of 33 personnel have been confirmed.

The press release from the J&K police states, “Citizens are requested to stay away from the blast site as the blast site needs to be preserved properly for investigators to examine. Your cooperation will be much appreciated in this regard”.

A video allegedly released by Jaish-e-Mohammed portrays a militant, recognized as “JeM fidayeen attacker Aadil Bhai”. In the video he is claiming the responsibility for the attack on a CRPF convoy in Pulwama district on Thursday.

President Ram Nath Kovind condemn the Pulwama attack and through his official twitter account tweeted, “Thoughts and prayers with the families of martyrs and wishing an early recovery to those injured. The entire nation stands united in the fight against the forces of terror and evil”.

The death tolls of CRPF personnel who were killed in Jammu and Kashmir’s Pulwama district was most probably to reach 30.

After an official statement by the officials, the death tolls in CRPF convey attack in Kashmir has mounted to twenty and the one who were seriously injured were moved to army’s 92 base hospital.

Also, the traffic on Srinagar-Jammu highway was also suspended and the search operation was launched.

Prime Minister Narendra Modi on the matter of this attack on CRPF convoy in Pulwama said, “The sacrifices of our brave security personnel shall not go in vain. The entire nation stands shoulder to shoulder with the families of the brave martyrs. May the injured recover quickly.”

The government of Jammu & Kashmir blocked the internet services in Pulwama and 3 other districts such as Anantnag, Shopian, and Kulgam.

Another tweet from the former Indian Army chief General VK Singh said, “As a soldier and a citizen of India, my blood boils at the spineless and cowardly attacks. 18 brave hearts from the CRPF laid down their lives in Pulwama. I salute their selfless sacrifice and promise that every drop of our soldier’s blood will be avenged.”

At 18:42 the officials said that the death toll could reach to 20. Governor K Vijay Kumar, who is the advisor to Jammu and Kashmir said, “As far as the death toll is concerned I was told it was initially 18 and 3 people were taken to hospital in critical condition. So, it could be 20. But I am only basing on telephonic reports I am getting from the field.”

Minutes after the attack, a militant group Jaish-e-Mohammad (JeM) claimed the charge for the attack. The spokesperson of JeM, Muhammad Hassan during the interview told the local media that the invader was none other than local militant, Aadil Ahmad alias Waqas Commando.

After the attack, the Jammu and Kashmir Police take up the inquiry in their hands. They said, “We’re doing the post-blast investigation to understand the circumstances. We’re now clearing the site. All injured have been shifted to the hospital”. When asked about the exact death toll they replied that at this stage the exact death toll is not possible.

On Thursday, 18 CRPF jawans were killed when militants targeted their convoy in Jammu and Kashmir at Pulwama district. As per the reports, in Goripora area of Awantipora an improvised explosive device (IED) blast was happened and then was followed by gunshots.

CLICK TO READ | Mobile Internet Shut in South Kashmir, Speed Reduced to 2G in Srinagar After Jaish Attack on CRPF Convoy in Pulwama

Mobile internet was suspended in south Kashmir as a precautionary measure to maintain law and order, officials said. 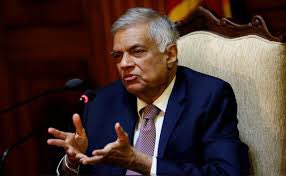 Sri Lanka PM Ranil Wickremesinghe: I strongly condemn the brutal terrorist attack in Kashmir’s Pulwama district — the worst ever terror attack in Jammu and Kashmir since 1989. I express my condolences to PM Modi and the families of police officers who lost their lives. (file pic)

Further in its statement, the MEA said, “This terror group is led by international terrorist Masood Azhar, who has been given full freedom by Government of Pakistan to operate and expand his terror infrastructure in territories under the control of Pakistan and to carry out attacks in India and elsewhere with impunity.”

The Ministry of External Affairs, in a press release, condemned the terrorist attack on security forces in Pulwama carried out by the JeM on Thursday. “This heinous act has been perpetrated by Jaish-e-Mohammed, a Pakistan-based and supported terrorist organisation proscribed by the UN and other countries,” it said in its statement.

We denounce terrorism in all its forms&reiterate the need to combat these inhuman acts with decisive&collective response without any double standards.We express condolences to families of the deceased&wish a speedy recovery to injured: Embassy of Russian Federation

“We condemn this cowardly terror attack. This is a crime against humanity. The sacrifice of our jawans will not go in vain. The entire nation should condemn this and support Indian govt’s fight against terrorism,” said Yogi Adityanath.

Mobile internet services have been snapped in the whole of South Kashmir and speed slowed to 2G in Srinagar district after the grisly attack on CRPF convoy in Pulwama.

“The attack was carried out by Pakistan backed Jaish-e-Mohammed. I assure the people of the country that a strong reply will be given and. The country pays tribute to the brave jawans who were martyred,” Home Minister Rajnath Singh said. 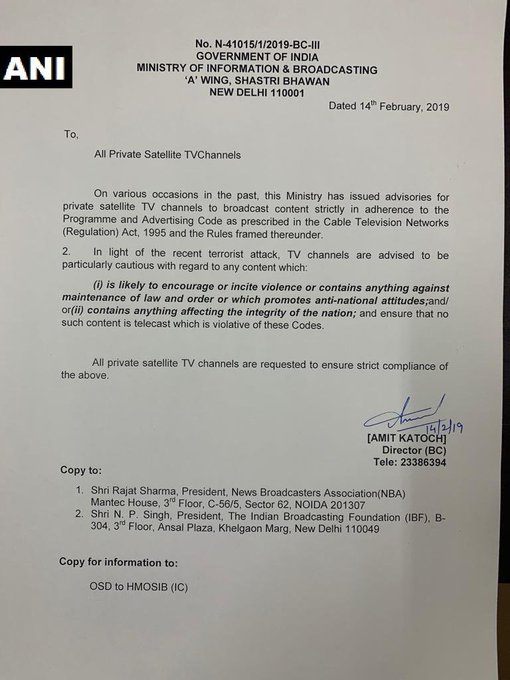 BJP President Amit Shah said, “I would like to extend my condolences to the families of the martyred jawans, the whole nation is standing with the families like a rock.”

Cabinet Committee on Security will meet at 9:15 am on Friday in the wake of the ghastly attack on CRPF personnel in Jammu and Kashmir’s Pulwama district.

“Police have registered a case. Officers investigating this terror crime are at work to establish full circumstances which led to the blast. Condemn this gruesome terror attack and stand by families of martyred and injured jawans at this critical juncture,” said Jammu and Kashmir police.

New Delhi: Jaish-e-Mohammed (JeM) and Lashkar-e-Taiba (LeT) are working together to carry out a high profile attack in Kashmir using a vehicle laden with explosives.

A 12 member team of NIA will go to the blast site on Friday to assist the Jammu and Kashmir Police in forensic evaluation of the spot. An IG rank officer of the NIA will lead the team.

Strongly condemn the terrorist attack in Pulwama, J&K. Thoughts and prayers with the families of martyrs and wishing an early recovery to those injured. The entire nation stands united in the fight against the forces of terror and evil #PresidentKovind

Today’s attack is one of the biggest militant attacks in Kashmir in the last two decades.

Death Toll Rises to 30 |  Thirty jawans were killed and 40 injured when a suicide bomber rammed a Scorpio car laden with explosives into a CRPF convoy in Awantipora town of Pulwama district on Thursday. This is one of the worst attacks since the 2001 Jammu and Kashmir legislative assembly car bombing.

Today’s attack is one of the biggest militant attacks in Kashmir in the last two decades. The last time a car bombing of such magnitude happened was in 2001 when JeM carried out a suicide bomb attack outside the Srinagar secretariat killing 38 people and injuring 40 others. This attack, however, is only the second ‘suicide’ car bomb attack in the valley.

According to the official of CRPF, there were total number of 70 vehicles in the convoy and one of them came under attack. There are a lot of number of jawans who were injured and the casualties are assumed to be going up.